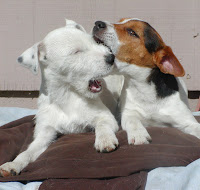 We (me and the dogs!) traveled to Arizona to visit and attend the AZ Rescue Trial 08. Great crowd. Kimberlite Kita did fantastic at her first show winning her class Saturday and getting Reserve 4-6 Puppy Champion on Saturday, Sunday she won the puppy racing which was really just a free for all, but she is really fast .
Kimberlite Elliott won his conformation class both days.
Kimberlite Livingston Won the Flat and Hurdles in racing both days and Was Veterans Tall Racing Champion both days and Reserve GTG Champion Sunday! The girls were in season and had to miss it! Over all we had Quite a weekend

2008 UC Davis CGJRTC Racing Day went well for us as well, What a fun day! Beautiful Weather, Nice folks, LOTS of spectators! Kimberlite Livingston Won the Flat and Hurdles for the Veterans and was Veterans Champion. Little Kimberlite Elliott got his first shot at racing competition and is quickly getting the idea, he won the flats and was second in hurdles, but in the Finals he really followed that lure and He was Champion under Puppy for the day!

We attended the CGJRTC 2008 shows and did extremely well, I was only able to show a few of the dogs as I had to drive back 3 1/2 hours on Sat night for my brother's 50th birthday surprise party and 3 1/2 hours back Sun am But it was well worth it...
Kimberlite Elliott did fantastic at this show winning his conformation class and Best Dog Pup both days and getting Puppy Champion on Saturday, and Reserve Puppy Champion on Sunday. He won the Puppy GTG his first time out starting in Novice and was Puppy GTG Champion Saturday and Reserve Puppy GTG Champion Sunday, quite a set of achievements for the little guy.
Kimberlite Kita won her conformation class both days.
Kimberlite Livingston was Veterans Tall Racing Champion both days and Reserve GTG Champion Sunday! Over all we had a wonderful weekend

I went up to judge the Rainer Trial this year 2008 and brought along Kimberlite Elliott for some 1 on 1 time and to get a chance to show him . It was a really nice weekend. Great trial site great people, lots of nice dogs. Elliott won his Conformation class, was Puppy GTG Champion, Puppy Racing Champion and Puppy Barn Hunt Champion Wow tthen they named him Super Puppy and he got even more prizes Barry and I were very proud of him What a way to end your puppy career.

We had a busy time at the Diggin West Trial, Dawn always puts on a really nice trial and we wanted to support her , so entered too many classes for me to physically make it to! But We did well, Barry came with and we camped there Inja decided she would come along and had clean runs in Agility 1, 2 and 3 though not fast enought to keep up with the younger guys though she placed well. She also placed 3rd in Super Earth Open division (not bad for 12 years old!) Kimberlite Livingston was Veteran Racing Champion both days. J&J Coyote Jonz was Reserve Open Dog under Sandra Ferber, Elliott, Bently and Glide won all their conformation classes both days and Salishan Glide was Reserve Best Bitch Puppy under Sandra Ferber (great way to end her puppy career!). Kimberlite Bonney was 2nd in the big Jumpers class, with a Q behind the super fast clean run of Connie McKee. Livingston placed in his Agility runs and in GTG. I have forgotten some I know ...
Posted by Kimberlite Jack Russell Terriers at 3:17 PM