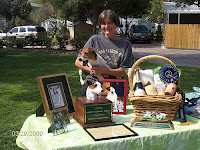 Just got back from the South Coast Jack Russell Terrier Trial.. and the dogs did fantastic!!
I went by myself, Barry stayed home, he had to work Saturday and someone has to take care of the rest of the crew and the horses ! I brought Kimberlite Livingston, Kimberlite Elliott, Salishan Krest to show and brought Salishan Glide for some more socialization time!

We had a great time with friends and the weather was beautiful! We camped with Gary and Dawn Kelly and had supper with them and Kelly and Connie. It is a really nice sight in Anaheim. Our dogs did fantastic. Our conformation went ok, not great, my friend Dawn did great. Krest won her class, and Elliott was second in his, Glide went into Conformation to practice handling and she got a 3rd.

Livingston was practicing his Obedience prior to the competition and a fellow came over to speak to us and commented on how much of a team we were, that made me very proud, His run was flawless this time and he watched me intently, we have been working on a trick that when he is in a Lay Down Stay I partially close my eyes and he does the same like a siesta instead of a forced down stay, and it worked! We were 1st in our Division and High Point in Obedience !
Racing went really well for all 3 terriers!
Livingston won both Veteran classes- Hurdles and Flats and was Veteran over Racing Champion. Krest won both the Novice Flat and Hurdles so I guess next time she get to try racing with those bigger bitches! Elliott suprised me placing 2nd in Under Dogs Flats and then Winning Under Hurdles ! So he made the Championship, not bad for his first real shot since an adult , last fall he hurt his foot in the first heat of flats! Well... He .. was Reserve Champion !! I was so very proud of him! Barry says maybe he is following in Dad's foot prints we shall see! On to the Caella Memorial Racing Trophy- The race between all the Winners in Racing all ages, all Heights ! Kimberlite Livingston WON the Perpetual Trophy,against all those youn dogs I was so proud and suprised I cried a bit! and Lisa and Sam said that they were so happy for us, as they knew Livingston was as special to us as Cabella was to them ! I have posted a picture!

A very special weekend, we came home with 7 big ribbons and from only 3 dogs wowo!

Ok we got back two weeks ago and I did not get this post finished as soon as I had hoped ....but..

I had a lot to plan the Racing at UC Davis which I took on this year, it was a lot of work to set up, but I think all that participated had fun and the dogs sure enjoyes the day, and we had a lot of spectators. Salishan Krest, J&J Coyote and Kimberlite Bonney, Elliot and Tessa all came along for the fun . Barry ran the Lure the whole day and we had the best UC Davis volunteer in Marina Pelayo. All the club members really helped out and we made lots of new friends. Kimberlite Issac came with his mom and dad (Human) and sister( JRT- not related!) They had fun and Issac caught onto racing right away and came in 2nd in first race behind his dad, J&J Coyote and 2nd in his second race behind his mom Kimberlite Bonney

Elliot was first in Under Dogs, Krest was second in under bitches and Coyote was first in over dogs, Bonney was the fastest of the Day!!! Good girl, she had a chance to really shine without Livingston there to take the spotlight!

Posted by Kimberlite Jack Russell Terriers at 10:52 AM 1 comment: