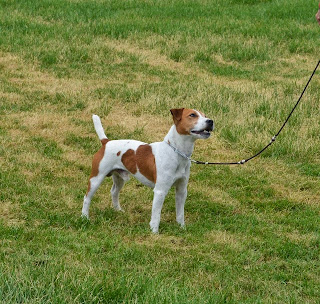 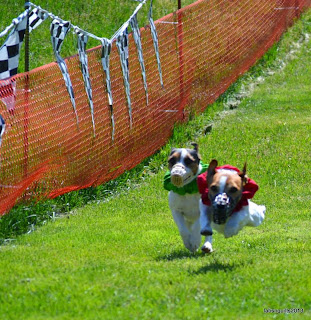 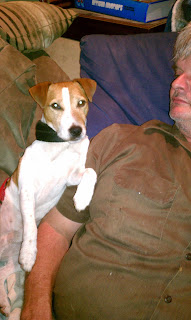 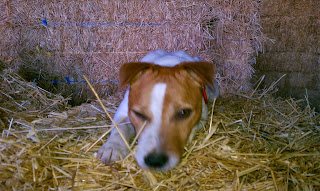 Well, it all started that several friends were planning a trip to Texas to go to this really great Trial, the Texas Two Step.  Sounded fun, then I met some of the people who organized the trial , they invited us , then people talked about it with enthusiam on line Ok I was hooked Iam going , I thought asked for the time off then who to take, I can only take one as I am flying and so my companion dog Charlie was the obvious choice ... did we have fun

He helped get everything ready bringing the items we would need toys , muzzle, leash, more toys, balls show leash etc  The crew at the Two Step offered to loan me an ex pen and bed and bowls (saved packing and carting them which really helped my back!!

We arrived in Houston Texas got the rental car drove and drove to the town, how cool there was a country band playing in the town square  We found our hotel (a little turned around but we got there ) Woke up ready to play
We got to the site and everyone was setting up we got our loaner gear and set up meeting some folks from Canada (they two were far from home and they had driven!
Off to Racing  (Texas dogs are fast so we were not too optimistic -but Charlie is fast too!)
Heplaced in his heat then won the flats I was exstatic we would make it to the finals ! Then he won the hurdles , those girls were fast - none of that polite gentleman stuff at this trial
We won RACING CHAMPION on Saturday SO COOL!
, off to our other events
We did our GTG and Super Earth and I though his times respectable in both

We had signed up to compete in the high point award so we had lots to do!
We went to Rally and did our run (we had never done Rally before but I knew he listened well and was hopeful - he did a good job and (I missed an obstacle  :(  ) so we placed but no blue...(all my fault he was flawless)
Then to Trailing and Locating-  He caught the sent and flew over the Haybales to the quarry (Not the course but he got there really quick..) opps
We tried the Tunnel vision (he thought it was weird you could look out of the GTG) ran the lure course tight turns are not his thing ) and went to Brush hunt and had the Zoomies  He had  a blast ! Did find the quarry and marked when he got focused !
We had our conformation class and placed 2nd
Had fun talking to friends old and new and checking out the place
Charlie went for a nap in his xpen in the sun
We ran our Agility course and he did a good job, considering we had not practiced enough

They called for the GTG awards and SuperEarth awards  We went over to check
They called out GTG no luck  But Super Earth I was hopeful  - Yes He was called SUPER EARTH CHAMPION for Saturday  The trophy was beautiful  Made by an artist in Russia  I was admiring it and stepped back and trip back over a box and grasping the trophy close to prevent it from breaking i landed pretty hard hurt my head and back  Rested up a bit  then they called for Jumpers  (could I do it -sure ) really slowly and stiffley I tried to keep up with my boy  he did fantastic we placed 1st in Jumpers!
Then they were getting ready for the dinner Smelled good and looked like fun with an Auction of some neat stuff... They annouced the Agility ribbons We placed in Agility 3rd and 1st Jumpers  Then Suprize  We Got RESERVE HIGH POINT in On Lead AGILITY!  So proud  His Grandma would be smiling down on us  She Won Agility Champion at age 13 in West Texas  Quite a feat @!

Awoke in the mornig a bit stiff but time for Racing ! We played a little ball to warm up way on the other site of the site but no Chrlie knew racing was on so he took off and ran to the track! I thought no he wasted all his energy but no he was just warming up he raced super  and had a blast Off to Racing (Texas dogs are fast so we were not too optimistic -but Charlie is fast too!)

He placed in his heat then won the flats with room to spareI was exstatic we would made it to the finals again ! Then he won the hurdles and just him and one girl in the final she was fast - but he was faster that day  I was stiff but not Charlie We won RACING CHAMPION  on Sunday too  Super COOL!
He had great times in GTG and SuperEarth and went on to A RESERVE CHAMPION IN SUPER EARTH behind Swamp Yankee Travelin’ Solo.  He was CHAMPION IN GO TO GROUND  Sunday Good Man Charlie Brown!

He was able to find the escaped Rat in the Brush hunt it was hiding behind a fence !
We got 2nd again to Collen Reeder's dog in Conformation
We did well in Agility and Jumpers And Got RESERVE ON LEAD
We go placement in tunnel vision Sunday and had fun Lure coursing and again jumped the Bales in trailing and Locating

Then came the big moment... "you and Chuck might have a chance" ,said  my friend Desi Blondeel-Timmerman who owns Kimberlite Bijou who had done really well a the trial with a 4th again the conformation Champion, 5th in over bitch racing a really competitive class, (her Dash was Reserve Senior Racing Champ Sat) 3rd in GTG, and  Super Earth RESERVE CHAMPION on Sunday and more I am sure I missed
Kimberlite Hooligan in his first Adult show did great and took everything in stride for Elle Thompson  He was 1st in over Smooth males, 3rd in Suitablity to Racoon Badger and made it to the final in racing

My friend Jen Elsner (who is moving to Texas ) had a great time with her Puppy Ground Force Here's Looking at you They placed in almost every puppy class She was a trooper ..

I was over the moon.  Wow -our trip to Texas was a lot of fun and we did really well
Posted by Kimberlite Jack Russell Terriers at 5:31 PM 1 comment: 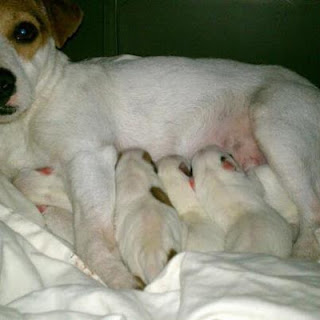 Kimberlite Buster Brown x Redstone Coquette pups arrived January 14, 2013.  This litter has been much anticipated.  3 girls and 2 boys.  All healthy and eating well ,they are growing fast 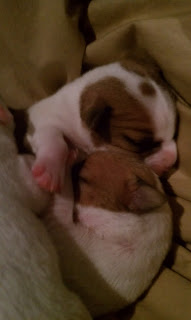 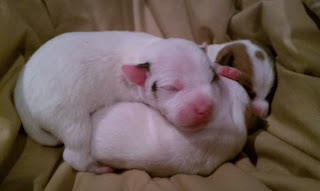 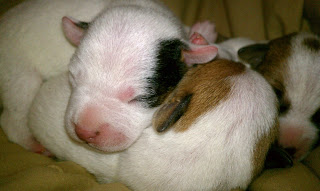 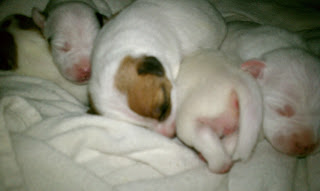 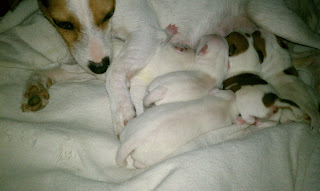 Everyone is nursing well The little white pup is amazing already tootling around the whelping box. 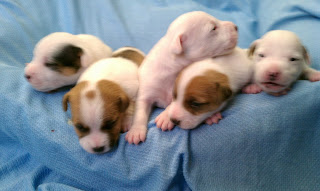 
Posted by Kimberlite Jack Russell Terriers at 11:24 AM No comments: