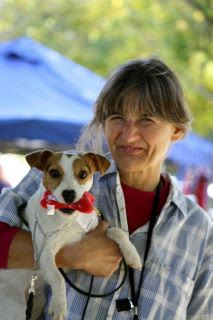 SCJRTC Winter Sol Trial 2011
The South Coast Club planned a trial for the winter this year. Our new litter was too little to come so Barry stayed home with them, their parents (Glide and Standley), Coyote, and the horses.
Charlie (Kimberlite Buster Brown), Elliott (Kimberlite Elliott), Krest (Salishan Krest) and Kit (Redstone Coquette) and I packed the van, booked a hotel, planned a visit with Barry's sister Carol and my brother Jonathan and his family and sent in our entry.
We made our way down being caught in a ridiculous amount of traffic in Los Angeles, were late to my brothers in SanDieo but made it and had a nice visit. 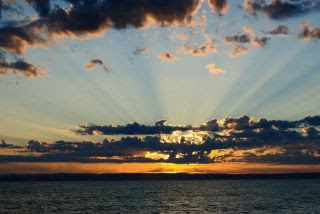 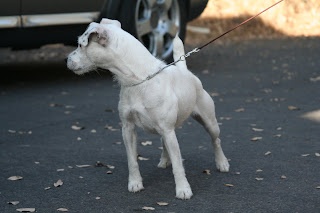 Peace to all
Alison Cook Cilliers
Posted by Kimberlite Jack Russell Terriers at 1:06 AM No comments:

Diggin West 2011 was a lot of fun. So nice to see friends and for the dogs to have some fun! It was a beautiful weekend and the dinner Sat night had a great lecture about C

ancer. The Kimberlite Jack Russell Terriers and their kids did really well and we are so proud of them. Lets start with racing

.. Charlie (Kimberlite Buster Brown) won Under Flt Racing both days and was Under Adult Racing Champion Sunday and Reserve Champion Sat (Kimberlite Elliott won Flats Sat, and made it into the finals both days but unfortunately got beaten by Robbin's speedy girl!

Carrying on in the performance arena-Both Elliott and Kimberlite StandanDeliver (Standley) 's kids did well in Racing and Barn Hunt and GTG, we are so proud of Promised Land Echo and Promised Land Cairo, and Kimberlite Bijou. Bijou won the Barn Hunt Sunday ! Bijou also did great in Colorado, where she has Best Bitch Puppy !

Charlie won his Conformation class both days and Elliott was second sat Coquette won her Confirmation Class Sunday. J&J Coyote Jonz (with help from Charlie and Coquette won the Tool Box class both days Salishan Krest was Best Bitch and Produce Sunday and 2nd Sat. Kimberlite StandandDeliver was second in racing Sat but ate some kind of a pip and was sick sunday and spent all night in the emergency vets office on Iv's etc, but he is ok now thank goodness ...
Posted by Kimberlite Jack Russell Terriers at 1:19 PM No comments:

Had a nice time in Southern California, in Valley Center, Bates Nut Ranch, Spring Frolic III & IV, the dogs did fantastic , and we got to visit with friends. We decided to camp in a tent at the site which was convenient, had not camped for a while missed the motor home!
Livingston's sons did not let him down doing quite well in racing and Elliott and Charlie qualified for the Incredible Dog Challenge!
Kimberlite Elliott had a good trial, he had to compete with his younger brother Charlie and Charlie out ran him in the Championships both days but Saturday Elliott won the Stakes racing ! Elliott was first in Under Hurdles Saturday and won the Under Flat Racing on Sunday! He performed great in GTG and SuperEarth placing Reserve Champion in Under Super Earth both days, and Champion in Go to Ground on Sunday and Reserve Champion on Saturday. He won the specialty Suitability to Red Fox in honor of Sharon Smith on Saturday!
Kimberlite Stananddeliver placed first in both Flats and Hurdle Novice racing on Saturday, placed in his conformation class, and qualified for his certificates in GTG and SuperEarth and can compete in the Championship GTG and SuperEarth at the next trial! Rhonda took a great picture of him at the top of the blog.
Kimberlite Buster Brown (Charlie) did fantastic won the Open under Flat Racing Saturday in a head to head battle with his brother, and won the hurdles Sunday, He was Reserve Racing Champion both days! He also won the Stakes Racing on Sunday He won his Conformation class on Sunday and was second Saturday. He did very well in GTG and SuperEarth and qualified for his certificates, and will be able to compete for the Championship next time out! Rhonda got a good pic of him in his conformation class.
Salishan Krest tried veterans racing on Saturday and as little as she is she still placed in flats and Hurdles! She was Reserve Champion in Veterans Super Earth Saturday and Sunday, and placed in Go to Ground both days. Her family did well in Best Bitch and Produce!
J&J Coyote did well winning the Suitability to Raccoon Badger on Saturday,and I believe he won his conformation class on Saturday as well, with Barry showing. Coyote won the Brush Hunt both Saturday and Sunday with amazing times both days! He tried racing on Saturday, but preferred to visit the crowd!
Salishan Glide did a great job in her conformation placing and not minding being handled by the judge Kevin Allen as Barry showed her!
Redstone Coquette came along with us and did well for her first outing, she visited well with people and placed 3rd in her class both days. See Rhonda's nice photo is above
Missed my old performance dogs, as buddies and sad not to have an Agility partner for this trial, and they had no obedience which Elliott and I have been practicing!
Look forward to the Incredible Dog challenge which will be our next outing June 10-11 at Del Mar Both Charlie and Elliott qualified, we should have fun , Livingston would be proud!
Posted by Kimberlite Jack Russell Terriers at 12:56 PM